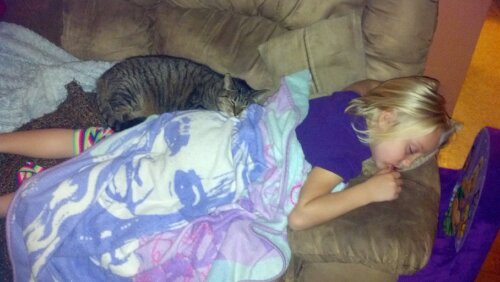 Tuesday M and I were leaving the psychiatrist’s office following a brief, positive recheck were he was impressed with her progress and more healthful appearance (ie she gained 3 lbs and wasn’t screaming & knocking over furniture).

As we left the building, which I am not too familiar with yet, we turned the wrong way in the parking lot and ended up at a dead end behind the building.  Just outside the vehicle, off in the grass a very short way, was a large, beautiful doe.

I put the car in park and we both ahhed over the magnificent creature, which just stood there looking at us for the longest time.

I rolled the back window down so M could get a better look.  She stuck her arm out the window and waved.

She waved, looked, and smiled for a few more minutes, the deer still motionless.  Then I told her we had to go.

Then we drove the other way, on our way home.

I thought about how grateful I was for turning the wrong way, or we would have missed that beautiful, precious moment.  I intended to head straight home, but God had something better intended for our time.

Autism is kind of like that.  Even for those of us who advocate for our children, who insist they are different, not less.  That they just see the world differently, and that we wish we could be like them.  All of that is true, and I wouldn’t change M or any of my children for anything in the world.  But there are those days, the bad days when the meltdowns are relentless, when I have to be afraid she will hurt herself or someone else…when I think “this is a wrong turn.  My life isn’t supposed to be like this.  My child isn’t supposed to be like this”…and then the beautiful moment when she sees patterns in everything, when she jumps with excitement when she sees a fire truck or singing at the top of her lungs to Taylor Swift…and I remember, she isn’t like other kids because God had something better, more beautiful, intended for our family.

In Her Own Words