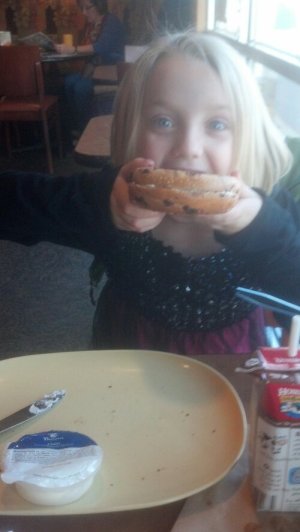 Everything is finger food…thankfully this is a bagel. 🙂

One common issue with an Autism Spectrum Disorder is food.  Many children on the spectrum will only eat food of certain colors or textures or even limit themselves to as few as one or two particular foods for long periods of time.  For a while when M was younger she avoided some food textures, especially soft or squishy foods, but for the most part she has been a great eater and we have not had to worry about her diet and nutrition.  In fact, last summer she tried crawfish, and loved it!  Now she wants to go to Red Lobster for her next birthday (sigh…McDonalds was so much cheaper!  lol)  The main side effect of her medication is weight gain, and she did gain 6 lbs in 4 weeks, but after that the weight gain stopped and she had previously been a little under weight, so the doctor was actually really happy with that.  He credits her ability to maintain a healthy weight with her high activity level and most of all her healthy diet…she loves fresh fruits and vegetables!

So we have not had issues with WHAT she will eat…our issues have been with HOW she eats. When M was a toddler, she was a legend among our family and at the daycare she attended.  People still talk about her, and the way she ate.  She was the MESSIEST CHILD EVER!  I am not exaggerating.  Anything that went into her mouth she had to spit out, touch, then finally put back into her mouth to finish eating.  She never used utensils and even with her hands was not very accurate at getting the food into her mouth.  It went everywhere.  She needed a bath after every meal.  I work with infants and toddlers, and I know that some of them, especially the ones that really love their food, can be a real mess sometimes.  But M was a disaster at every meal, far past the time she should have been using utensils and eating neatly.  At least she did not disappoint for the big first birthday cake photo.  My oldest daughter neatly ate hers without a mess at all…no good photo/blackmail opps.  M, on the other hand, was a beautiful mess.  It was a lot of fun!  🙂

By the time M went to Occupational Therapy shortly before age 4, she would use utensils sometimes, only if they had plastic handles.  Restaurants have been a nightmare for several reasons, but one of the reasons at that time was that if I forgot to bring a plastic handled fork in my purse especially for M, she would have a meltdown and not eat.  She was still very messy.  By the time she finished her first round of OT about 6 months later she was, although not super neat, still a much cleaner eater and better with her utensils.  I’m not exactly sure when it happened, I think around the time M started school this year, she stopped needing plastic handles on her utensils.  M still often has food on her clothes after a meal, sometimes even all over her pants and shirt.  Tonight she had tilapia in her hair.  But overall she is much better.

The past few months, M has pretty much stopped using her utensils again.  I am not sure how much of this is fine motor difficulty, how much of it is sensory related, and how much (if any) of it is related to her eyes not working together.  It will be interesting to see if she is able to use utensils again after she gets used to her glasses (which should come in in the next day or so).  It was pretty odd to watch her tonight eating her dinner (tilapia, potatoes and peas & carrots) entirely with her hands.  She even scooped the panko breading (insisting it looked “gross”) off her fish with her fingers.  Yuck!  I will take it, though.  I would much rather have a 5 year old who eats with her hands than face some of the food challenges so many other parents have to work with. 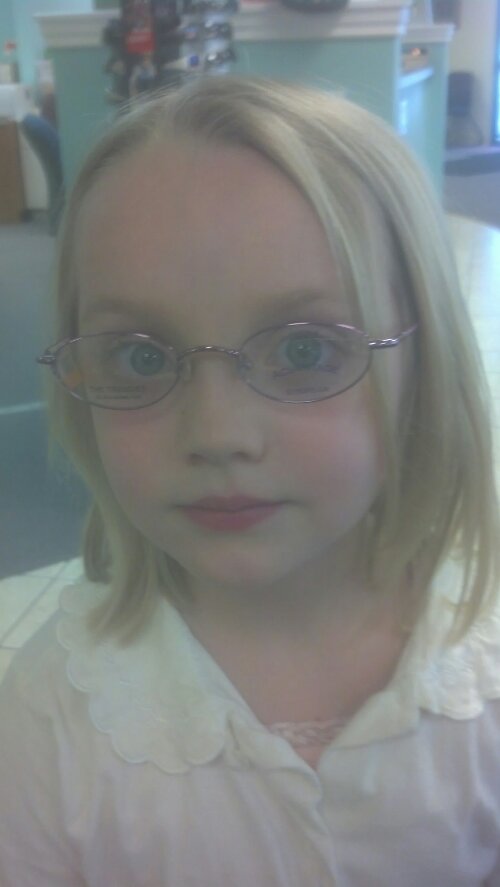 M in the frames she chose today

As many of you know, in February M was diagnosed with C.I., also known as convergence Insufficiency.  A year before a trip toma developmental optometrist to check out her claims of having a hard time seeing sometimes showed delayed ocular motor development.  Because she also had delayed fine motor skills and was only in preschool, the doctor wanted to follow up with her in a year to see if she had improved.  (Gross motor develops first, then fine motor, then ocular motor.)

This winter, testing showed that  M had significant trouble focusing her eyes.  They would not track properly or work together…when required to focus on an object up close her eyes would start to shake, then her left eye would turn away in the other direction or up into her eyelid.  Her eyes had to work very hard to not see double, and she was sometimes seeing double anyway.  The doctor wanted to wait 6 months to see if she outgrew this convergence insufficiency, but warned she could get worse quickly and to come back if she had a hard time with school work, complained of headaches or double vision, etc.

M cried all that evening from eye fatigue and went to bed early.  She seemed to steadily decline from there, complaining throughout the day at school (especially ‘close work’ times) of eye pain, then headaches, then blurred vision and occasional double vision.  At home she refused to do any writing/drawing homework, but I was unsure if that was due to her fine motor or vision problems.

Today I explained all of this to the optometrist and he did some more specific, in-depth testing to check her tracking/focusing abilities.  It was even worse than we thought.  Her ability to use her eyes together to focus and track is significantly impaired, to the point that even the doctor was surprised that she is doing as well as she is.  At this point, to take the strain off of her eyes, we are going to use glasses with low level, light lenses.  She will go back in a month to see if that is enough, or if she needs additional help such as higher level lenses and/or vision therapy.  She may outgrow this impairment in a year or two, or she may not.  Right now the concern is to help her be able to focus and see comfortably enough to learn in school and do her work, and to preserve her vision (in extreme cases of C.I. you may lose vision in one eye as it shuts down to keep from having double vision).

I am so glad we are on the road to helping M with her vision.  I am also thankful that she is not concerned about wearing glasses.  I assured her no one will make fun of her (most kids actually think glasses are cool) and she has been using mine to help her read, so she knows how much better she will feel.  I am also glad I made the unconventional choice to take her to the developmental optometrist (last year she had just had her preK vision screening and it turned out fine).  I am hopeful…who knows what all symptoms are caused by the pain, fatigue and frustration of trying to see properly, and might be improved with glasses?  I can’t wait until she gets them next week and can start having relief!